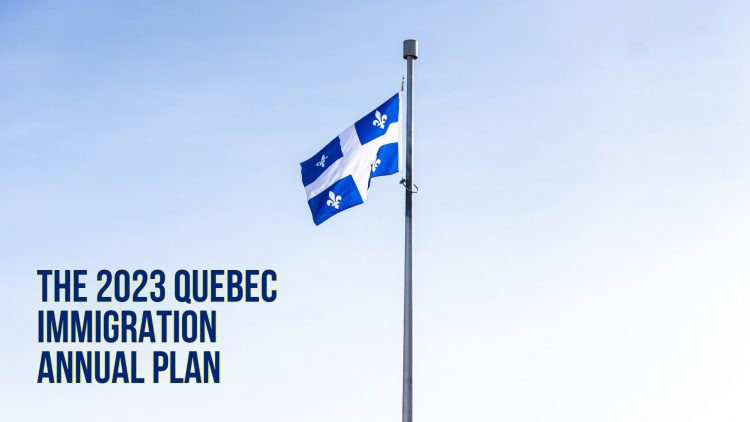 This is the 2023 Quebec Immigration Annual Plan

For those who are not familiar, Quebec has around 22% of Canada’s population. Therefore, it is entitled to a higher share of the annual immigration intake. According to Canada’s 2023–2025 Immigration Levels Plan, there will be 465,000 new permanent residents in 2023. This means that Quebec has the legal right to welcome 102,300 newcomers. However, the Quebec government decided to choose half of that amount. Let’s explore what the new Quebec 2023 immigration plan brings.

Most new admissions to Quebec in 2023 will come through the province’s economic immigration programs. This includes the Quebec Skilled Worker Program (QSWP) and the Québec experience program (PEQ).

The province plans to welcome up to 33,900 immigrants under Economic immigration, similar to its immigration target in 2022. The economic category represents the largest proportion of newcomers, with over 65% of planned admissions and:

Of course, the remaining 18,100 new permanent residents are expected to arrive through family reunification, refugees, and other immigration programs.

In addition, Quebec is planning to welcome a minimum of 10,200 and a maximum of 10,600 permanent residents under family reunification. This is totally unchanged as compared to the 2022 targets.

Similarly, the rest of the immigration quota allocation has been unchanged by the Quebec immigration department for 2023, counter to Canada’s aggressive immigration levels plan announced on November 1, 2022.

Every year, Quebec presents its immigration plan, which outlines the number of new permanent residents the province intends to admit. It also outlines the categories in which it will admit them. To date, plans have been released outlining targets for only the coming year. However, in 2023 a consultation will take place in which the province will create a multi-year plan beginning in 2024.

You can also read this in Spanish