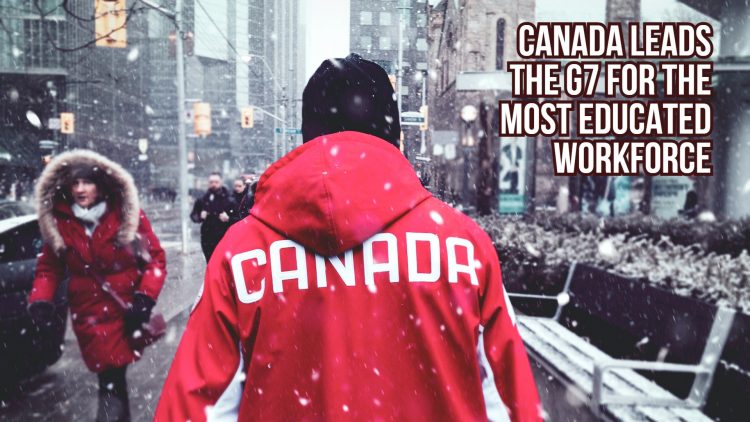 Maintaining Canada’s standard of living and economic growth is predicated on having an educated population. In 2021, according to Canada’s census, 57.5% of working-aged people (aged 25 – 64) had a post-secondary degree from either college or university. Canada has led the G7 nations in post-secondary degree holders since 2006. This is largely due to the high levels of college diplomas held by the working-age population. Nearly 1 in 4 working-age people held a diploma.

Further, Canada is in a modest 4th place in bachelor’s degree holders (32.9%). But it lags far behind other G7 nations in working-aged persons with graduate degrees.

This growth was supported largely by immigration to Canada. Nearly 6 in 10 immigrants who landed between 2016 and 2021 had bachelor’s degrees or higher. Moreover, nearly half (2.1) of the 4.3 percentage point increase in bachelor’s degree holders can be attributed to immigrants landing in that time period.

“In 2021, immigrants and non-permanent residents accounted for over half of the working-age population with an earned doctorate (55.8%), a master’s degree (52.2%) or a degree in medicine, dentistry, veterinary medicine or optometry (50.8%), and accounted for 39.1% of those with a bachelor’s degree.”

Higher-educated recent immigrants (landing between 2016 – 2021) also experienced higher than average hourly wages when compared with immigrants landing between 2011 – 2016. Unfortunately, highly educated immigrants with foreign credentials are more than twice as likely as their Canadian-born counterparts or immigrants with Canadian credentials to be overqualified (i.e. working in a position that requires a high school degree or lower) for their jobs (25.8% versus 10.6% and 11.8% respectively).

This presents an issue for immigrants to Canada because, in 2021, 63.8% of immigrants with a bachelor’s degree or higher completed it outside of Canada. This holds true for immigrants working in high-demand jobs too. Only the following group worked in their profession, or one that is closely related:

This is compared with approximately 9 out of 10 people with Canadian nursing or medical degree credentials working in their fields. If all the immigrants with foreign credentials were to be working in the fields they were educated in, there would be an increase of 27,350 nurses (or closely related professions). Also, there would be 15,730 doctors of working age across the country.

“It has long held true that people with postsecondary credentials generally have higher employment rates and earnings than those without them, and thus the further one goes in school, the greater one’s economic security.”

The pandemic exposed how some jobs are more protected from adversity than others. Those with bachelor’s degrees or above were more likely to work in “triple-protected” jobs than their lower-educated counterparts. A triple-protected job is one that is permanent (not a contract or casual position). Therefore, it cannot be automated easily, and is more resilient to adverse social conditions like being able to work remotely.

Area in which education did not provide a buffer

The one area in which education did not provide a buffer was the skilled trades. This area has either stagnated in their growth or declined due to workers leaving the field quicker than being replaced. One reason for this is because of the high earnings of men with apprenticeship certificates pre-pandemic (nearly $70,000/year). In this case, it wasn’t offset completely by earnings through government programs like CERB. Also, women, who are highly represented in trades like hairdressing and cooking, were in positions that were the first to be shut down during the pandemic. “Over 70% of women with an apprenticeship in hairstyling” received the CERB”.

To learn more about the educational attainments of Canada’s population, read the full report here.

If you have a broad question about immigration to Canada, please fill out the following form. However, if you have specific questions, book a consultation session. You may alternatively fill out our free assessment form.