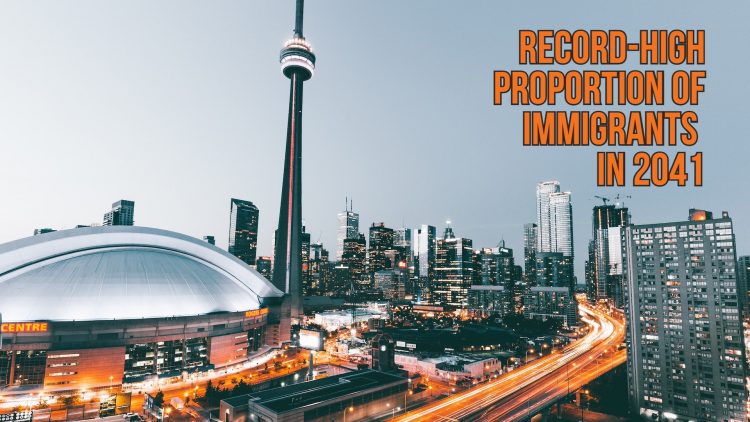 Canada projects a record-high proportion of immigrants in 2041

Furthering a trend that began in the early 1990s, immigration is projected to remain the main driver of population growth over the coming decades.

According to the reference scenario, the Canadian population would reach 47.7 million in 2041. Of those 47.7 million, 25.0 million of them would be immigrants or children of immigrants born in Canada. This accounts for 52.4% of the total population.

Statistics Canada projects that in 2041, the proportion of immigrants in the Canadian population could reach from 29.1% to 34.0%. This would be a record-high level since the 1867 Canadian Confederation.

Further, it is anticipated that, by 2041, “immigrants and their Canadian-born children” could account for 52.4% of the country’s total population based on the reference scenario used by StatsCan. This would be an increase of 12.4% from 2016 when Canada’s population came in at 14.4 million and the same group made up 40% of that total.

Considering that population growth in the coming decades will depend primarily on international immigration, Statistics Canada projected that the Canadian population will include 9.9 million to 13.9 million people born in Asia or Africa. These peoples alone could account for 23.1% to 26.9% of the total Canadian population in 2041, up from 13.5% in 2016.

Immigrants would live mainly in Toronto, Montréal and Vancouver

<<Also Read: Calgary, Vancouver and Toronto among the most liveable cities in the world>>

The contrast between the country’s urban and rural regions will add to some of the current challenges arising from their specific demographic dynamic:

These projections provide relevant information about substantial changes that are transforming the social fabric of Canadian communities. Moreover, they show that this relative increase in the number of Canadians with diverse backgrounds and cultural influences is expected to continue over time.

You can also read this in Spanish