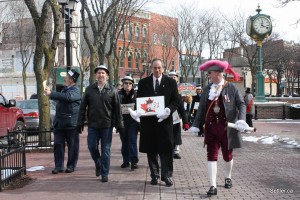 Chatham-Kent is one of hopeful cities to be placed on a special edition of Monopoly board on its 75th anniversary. A group of 65 cities from around Canada have been selected by the board creators. Twenty of those cities will make it to the board with a special place for the first on the list. The final selection of 20 cities is based on votes placed on MonpoloyVote.ca. Chatham-Kent was on top of the leaderboard with 6.1 percent of the total votes followed by a city from Quebec with 5.6 percent of the votes when the organizers of the websites decided to hide the leaderboard from the public.

Voting will remain open till February 7, 2010. A group of Chatham residents in an effort to remain on top of the leaderboard marched the King street on February 4th, 2010 to raise awareness among other residents and encourage them to vote for Chatham-Kent.  The crowed was accompanied by Randy Hope, Chatham-Kent mayor and Steven Pickard and Marjorie Crew two of Chatham councillors.

Good weather conditions and a sunny sky encouraged a group of 30+ people to support the cause. Many passerby motorists and pedestrians supported the group. Some of the walkers wore donning top hats reading “Vote for Chatham-Kent”. They also carried various signs to encourage people to vote.

We need to wait till June 2010 to know the result. I hope we make it to the top of the board. That is my sincere wish. I enjoyed joining the crowd and taking pictures to remember this day in the future. I need the reminder when I am enjoying a monopoly game with Chatham-Kent on board.