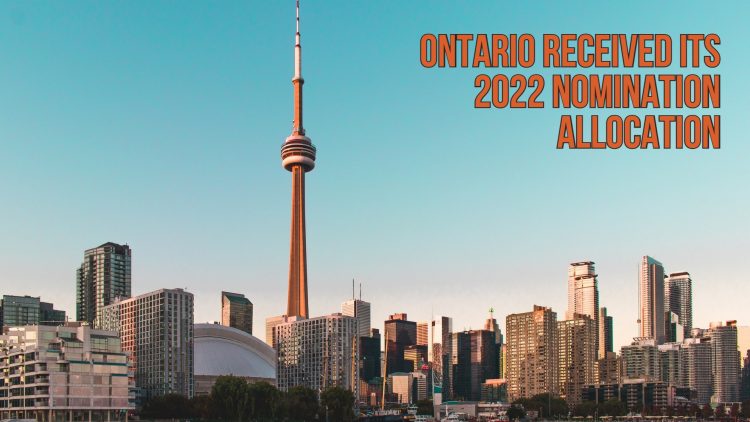 Ontario will only approve a total of 9,750 applicants this year

This means that the federal government did not listen to the request of the Minister of Labour, Monte McNaughton, to ‘significantly increase’ the number of nominations for the province.

It is important to mention that as of April 2022, there were more than 300,000 jobs in Ontario going unfilled. You can read more about this and the recent changes to the OINP, in the following article:

A look back on Ontario immigration in 2021

In 2021, Ontario received 8,350 allocations, plus an additional 250 nominations for temporary foreign workers in intermediate skilled occupations. This means NOC Skill Level C. Furthermore, before the end of the year, Ontario got an additional 400 nominations.

In January 2022, the province announced that it reached its 2021 nomination allocation. The province issued a total of 9,000 nominations across all streams in 2021, including the 400 additional nominations. Ontario got these ‘extra spaces’ from the federal government through an in-year reallocation.

According to Statistics Canada, the number of job vacancies in Ontario increased significantly in 2021. Consequently, in November of 2021, Labour Minister Monte McNaughton asked for an increase in the number of skilled workers allowed into Ontario under the program. Ontario also wanted to have more control over the number of immigrants allowed under the OINP, as well as the process of selecting them.

It is also important to note that Ontario is among the provinces with the highest immigrant retention rate in Canada.

About the Ontario Immigrant Nominee Program

You can learn more about immigration under the Provincial Nominee Program, here.

If you are interested in applying to the Ontario immigration program, please fill out the following form. However, if the question is case-specific, we’ll advise you to book a consultation session. You may alternatively fill out our assessment form.