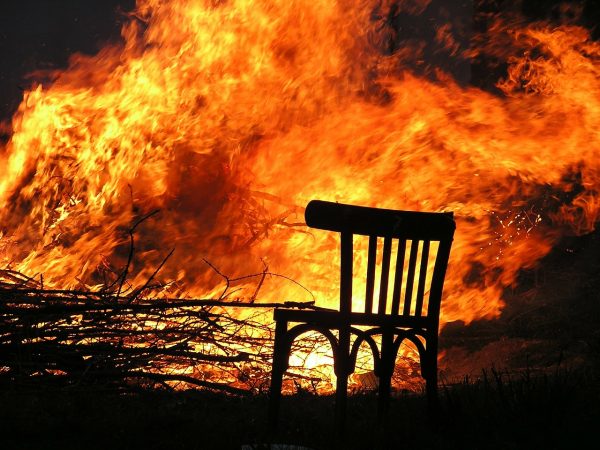 One of the issues that I noticed right after landing in Canada was houses that were mostly made of wood. Lumber (wood sawed into boards, planks, or other shapes) is the main structural material in Canada. There are plenty of forests in different parts of Canada covered with conifers also known as needle-leaved or evergreen trees such as fir, pine, hemlock, and cedar. These trees are the main sources of softwood lumber which is widely used in construction of houses.

Wood easily catches fire. This is the main drawback of using wood in the structure of houses. It is common to open your daily newspaper and read about a house that has caught on fire. The more wood used in the house the quicker the fire spreads.

Of course Canadians take several precautions to reduce the risk and minimize the aftermath of such events. For example they install fire alarms on every level of their buildings. The use of modern technology such as induction stoves could reduce the risk to some extent.  It is unwise to leave an electric or gas equipment unattended while it is operating. If a licensed technician inspects such equipments regularly you could reduce the risk of blaze significantly.

On the other hand it is wise to insure your house, home contents, and valuable belongings. You never know what could happen next. Although insurance could not compensate for the sentimental value of your belongings but at least you do not encounter financial problems after such a devastating incident.

You might think that this would never happen. Unfortunately the news says otherwise. A Chatham funeral home, a 168-year-old building destroyed a few days ago due to fire. The building was only a block away from the fire department but the fire spread so quickly that 1.7 million dollars worth of property vanished in a few minutes. The building is unsafe and needs to be demolished very soon. The following images show the extent of the destruction. A Chatham ON Funeral Home after Fire A Chatham-Kent Funeral Home after a Destructive Fire A Chatham, Ontario Funeral Home is Destroyed due to Fire